The basic plot of Branded courtesy of the IMDB: “Set in a dystopian future where corporate brands have created a disillusioned population, one man’s effort to unlock the truth behind the conspiracy will lead to an epic battle with hidden forces that control the world.” To say we were hugely disappointed with Branded would be a massive understatement. Jamie Bradshaw and Aleksandr Dulerayn’s Branded is absolutely terrible, it’s a real mess of a movie and it’s just boring – definitely the worst film we’ve seen for ages. It’s a shame as the trailer suggested a mind bending bonkers monster B-movie. Yes, the CGI looked a bit ropey but the premise of a modern day version of John Carpenter’s ‘They Live’ looked really promising. We kept giving it a chance and to our credit we made it to the end only to see Max Von Sydow (the villian) get randomly killed by a lightning bolt for no good reason and don’t get us started on the talking cow. Rubbish! 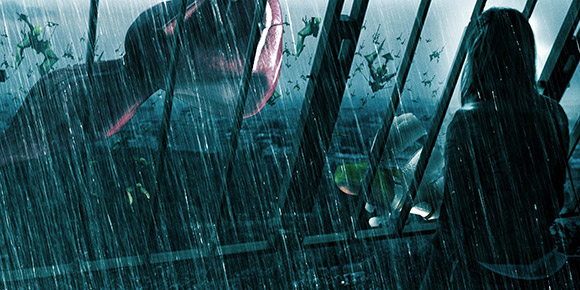