Wrath Of The Titans

A decade after his heroic defeat of the monstrous Kraken, Perseus (Worthington) – the demigod son of Zeus (Neeson) is attempting to live a quieter life as a village fisherman and the sole parent to his 10-year old son, Helius. Meanwhile, a struggle for supremacy rages between the gods and the Titans. Things look like they’re hotting up for this CGI Fest Clash Of The Titans Sequel.

Here’s what Empire Online had to say about the trailer:

The first trailer for myth-raiding sequel Wrath Of The Titans arrived back in December, but now a slightly longer destruct-o-fest has hit the magical interwebs. If you are righteous and brave, take a look below.

This time around, we find Perseus (Sam Worthington) 10 years on from his adventures opposite giant beasties in Clash. Trying to live a normal but probably slightly smelly life as a fisherman, he’s summoned back into action when mighty Titan Kronos begins to break his troops out of imprisonment and threatens Zeus (Liam Neeson) and co. But because the Gods can’t deal with these pesky problems themselves, and because Hades (Ralph Fiennes) is stirring up yet more trouble, guess who has to step in? 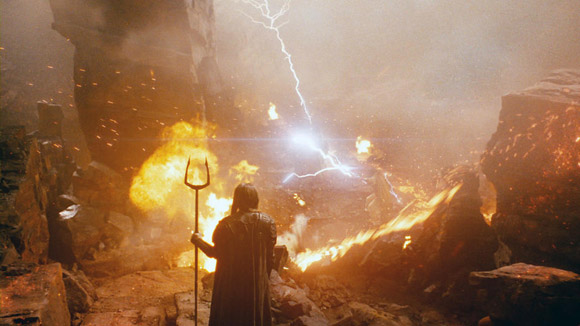 Jonathan Liebesman (Battle: Los Angeles) is behind the camera and, if the trailers are any indication, he and Warners have simply taken everything about the first movie and cranked it up a notch, including Worthington’s hair. So: more CG monsters, more battles and lots of people shouting. Oh, and the added fun of seeing Rosamund Pike staring open mouthed at something that was probably a man with a ball on a pole when shooting, but now looks like Lord Of The Rings’ Balrog made himself a mansuit.

The Titans Will Wrath on March 30. We’re just hoping the 3D is better for this one…

Amazing War of the Worlds concept art by James Cly